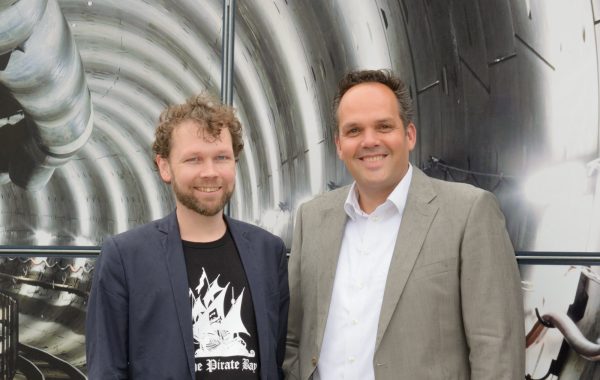 Almost five years ago, on Wednesday 10 September 2008, construction of the Noord/Zuidlijn metro line was seriously disrupted by subsidence on Vijzelgracht. Besides significant changes to the organisation, management and execution of the project, it was also necessary to fundamentally change the project’s communication methods. Two of the key elements in the radical change of direction in communication were – and are – the web and social media. In this article and the associated vision document, we describe our vision for online communication and reputation management as well as the obstacles we have encountered.

Improve relationships with the city
The calamities that occurred on Vijzelgracht in 2008 almost sounded the death knell for the Noord/Zuidlijn project. Amsterdam was seriously embarrassed by the discussion that flared up, the increasing opposition to the construction work, and the deepening mistrust in the project organisation. An investigation commission headed by former minister Cees Veerman was tasked with examining how to take the beleaguered metro line forward. Veerman recommended completing the line, subject to a large number of adjustments to its organisation, management and execution. The Veerman Commission focused in particular on the City of Amsterdam’s communication strategy. ‘Improve relationships with the city and local residents’ was its urgent advice. 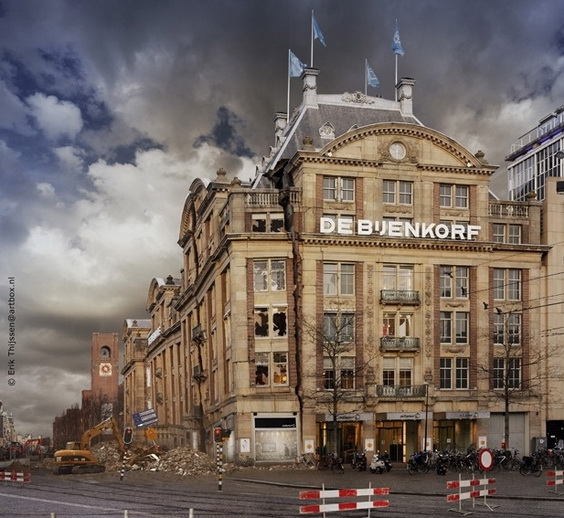 The Noord/Zuidlijn project – worst nightmare in 2010

“Wait until the dust has settled”
The construction of the Noord/Zuidlijn metro line stopped at Rokin and Vijzelgracht stations for almost a year, from September 2008 to August 2009. The dominating sentiments underpinning crisis communication within the project organisation were based on starting points such as: “Wait until the dust has settled”, “It’s better to keep a low profile if public opinion is turning against you”, or “Keep out of the limelight until you have your own house in order”.

New identity
Since the presentation of the Veerman Commission’s final recommendations, we have been working on repositioning the image of the Noord/Zuidlijn project. Our aim is to regain the trust of residents and businesses around the excavation sites, crucial stakeholders, and, of course, the people of Amsterdam themselves. The Noord/Zuidlijn project is being given a new identity in which the builder and the tunneler (tunnel boring machine operator) become the face of the organisation. The core themes of the new Noord/Zuidlijn are sensitivity, realism (“one hell of a job”), expertise, and the fascination of a mega building project in the city. By doing so, we said goodbye to the image of the project as a closed organisation with inward-looking, uncommunicative engineers for whom the gospel of the technology is the be-all and end-all.

Hierzijnwij.nu
We have developed a new website, hierzijnwij.nu (the name means “hereweare.now” in English), about the use of tunnel boring machines (TBMs) below the city centre that started in March 2010. The website has two functions: to track the TBM process and to facilitate dialogue and cooperation with the city.
The hierzijnwij.nu platform is based on the following starting points:

September 2011: Tunneling crew poses in the tunnel built by the tunnel boring machine ‘Noortje’ on the western side of the Damrak. Photo: Frank Lodder

Real-time image
With the new website, there is no turning back for the Noord/Zuidlijn project team. The site tests the organisation’s new values to the max. The project can be followed through the city every step of the way; every setback or surprise is visible and can no longer be concealed. The project team can demonstrate its new identity at hierzijnwij.nu. The employees tell the story of the Noord/Zuidlijn project honestly and openly, but even more importantly, they listen to the opinions, comments and suggestions of interested parties, critics, and stakeholders. All the information and opinions about the Noord/Zuidlijn project on the Internet come together at hierzijnwij.nu. Discussion is ongoing, and all these opinions can be seen on the home page. The project’s image is, as it were, being shaped in real time by the interaction between Noord/Zuidlijn employees and their followers on the internet.

Growing trust
Having started in 2010 as a campaign site about the work of the TBMs, the website hierzijnwij.nu has since grown into a cross-media community platform about every aspect of the metro line. After three years of hard work, we can proudly claim that our web strategy has played a major role in building trust in the city as a competent principal, implementer, and bearer of final responsibility for the construction of the Noord/Zuidlijn metro line. Besides the subsidence on Vijzelgracht and cost overruns, the fascination of the underground construction work and the heroism of the men working on it are featuring ever more prominently in the public perception of this project.

Commenters
The effectiveness of our web presence is clear for all to see every day at hierzijnwij.nu. We have managed to build our own sizeable community in a relatively short time. The hierzijnwij.nu platform has regular followers who behave in the same way as people who comment on the major national blogs. They comment on almost every report and regularly initiate discussions among themselves. Noord/Zuidlijn employees respond to all comments, so there is a broad conversation on the Noord/Zuidlijn project ongoing every day that anyone can read and join in.

Web statistics
The number of visits to the website has increased almost fivefold in less than a year. With an average of 50,000 visitors per month, hierzijnwij.nu is the City of Amsterdam’s most popular website. See the vision document for a detailed breakdown of web statistics for hierzijwij.nu in 2012.

Sender bias
Without having undertaken exhaustive research, we believe it is true to say that most government organisations want their communication departments to provide the public with accurate information in an easily accessible way. That is not the same as allowing the information to be informed and coloured by the same public in order to facilitate collaboration and dialogue. By focusing solely on the information function of the Internet, the communication function (on the web) is reduced to information provision along traditional lines. The organisation informs people via the web (one-way) but does not communicate (two-way, or interactively). This leads to a dominant sender bias in these government organisations’ web strategies. We believe this is diametrically opposed to the starting points we outlined earlier for the Noord/Zuidlijn web strategy.

Identity
A second online dilemma for a public body is its identity. The identity of most municipalities is based on general core values and agreements governing how officials act towards the outside world. At first glance, this is a perfectly understandable strategy and choice. However, if you apply the guidelines to online dialogue and collaboration, things begin to jar. Experience – not least that of the Noord/Zuidlijn project – shows us that as an official on the web, you need an identity that ties in with the service or project you are working for.

After all, every part of the municipality represents its own specific themes and its own specific values. Naturally, these dovetail completely with the general values of the municipality as a whole, but they are worked out in greater depth. We saw that happen with the Noord/Zuidlijn project straightaway. When employees identified themselves online, they did so as employees of the Noord/Zuidlijn project, part of the City of Amsterdam, with the values of sensitivity, openness, and realism.

Public authority policy does not provide for online “sub-identities”, so it does not allow any opportunities for online profiling of a specific department or local theme, or – in the most extreme form – of an employee. On the web, we are seeing increasing personification of communication, involving not only the identity of the part of the organisation concerned but even the personal identity of the employee themselves. With the Noord/Zuidlijn project, you can see that the personal image of the employees has increasingly been forming the organisation’s identity. 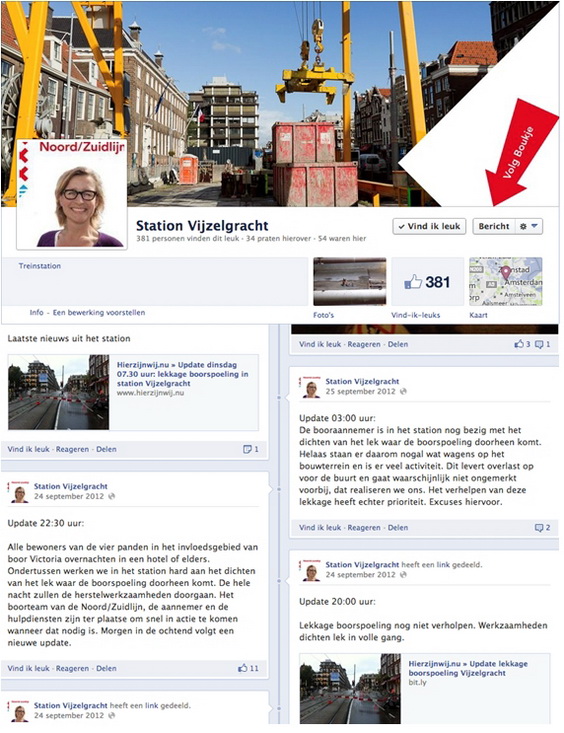 Project leader Boukje on Facebook; her personal identity showing the values of sensitivity, realism, and awareness

Centralisation
The specific personal identities in online communication and its interactive nature still clash with another public authority trend, which is closely linked to the sender bias and identity in general: the centralisation of web communication. Centralisation of the web with a central identity and image as well as standardised information makes it increasingly difficult for the public to connect with this digital authority. Standardisation makes information impersonal and procedural, leaving no opportunity for people to inform and colour it together. This makes it difficult for the authority to participate in or build up online networks.

Finally
We hope this article and the accompanying vision document will inspire and challenge others in the sector to overhaul and improve the relationship between public authority and citizen with a distinctive online strategy; to move away from the pure concept of information that often prevails in public authorities; to create scope for experimentation in policy and to tap into the spirit of the times; to occasionally leave behind ingrained traditional convictions around communication and the urge to control.

The full vision document for the Noord/Zuidlijn online strategy can be downloaded here as a PDF.